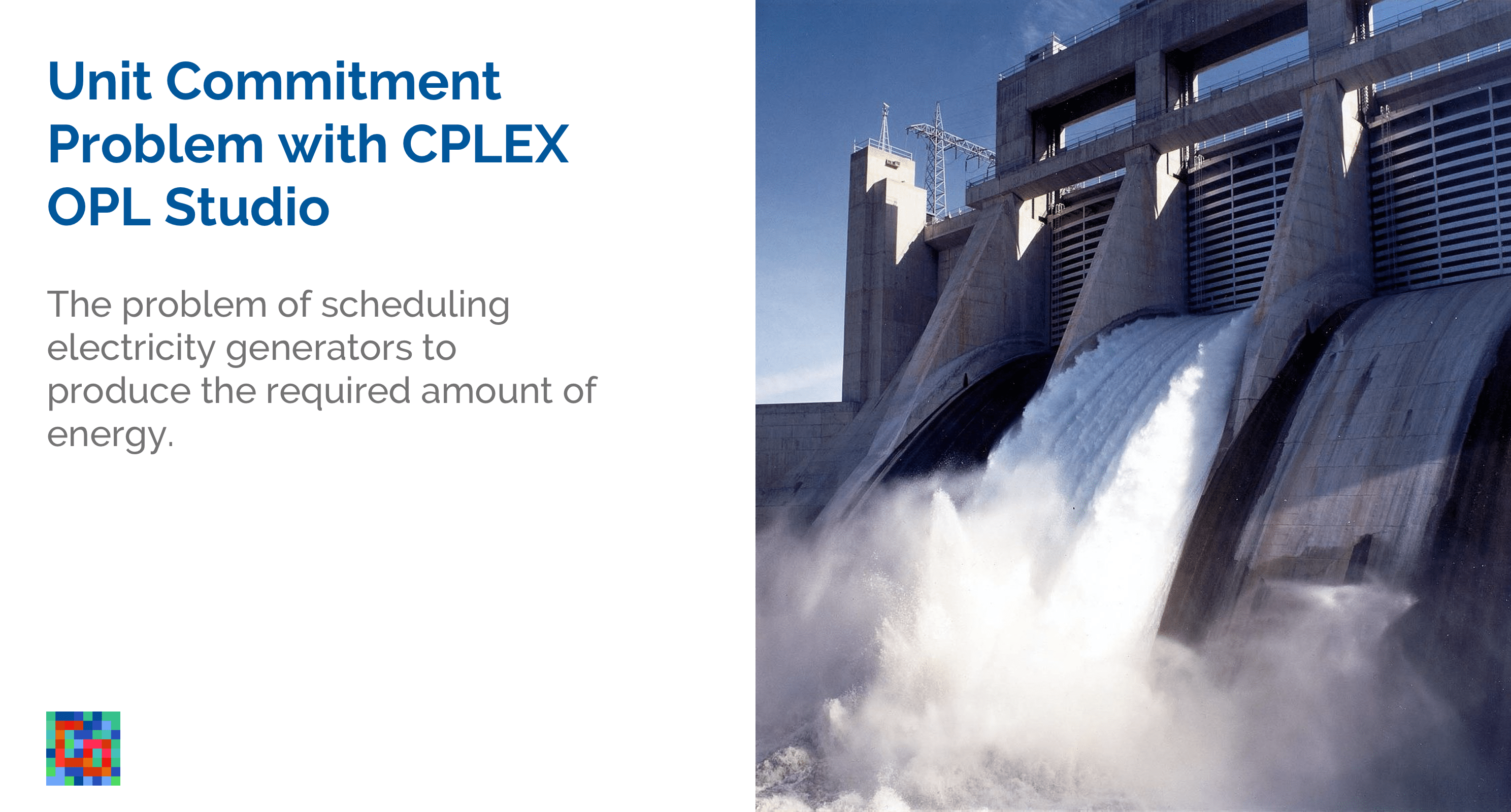 The Unit Commitment problem (UCP) consists in deciding which power generators to run, in which periods and at what level in order to satisfy the demand for electricity.

Electricity companies need to solve the UCP problem on a regular basis. We will use a simple example from power provider TNB to explain the UCP in details.

TNB is a power company in electricity generation, transmission, and distribution. Its responsibility is to ensure a reliable source of electricity at the lowest cost. TNB customers are connected with power from hydroelectric and thermal plants through a network system made up of transmission lines, substations and distribution lines. It is via this reliable system that TNB supplies electricity to customers consistently and continuously, as well as ensuring a balance between demand and supply at all times.

Every hour, electricity companies need to decide which power generators to run, in which periods and at what level in order to satisfy the demand for electricity. This problem is known as the Unit Commitment Problem (UCP).

The objective of the UCP is to optimize the electricity generation to cover the forecasted demand in accordance with fluctuating price forecasts and constraints on reservoir capacity of the different types of units.

The known characteristics of the generators usually are

Predictive models are used to generate the demand forecast.

A number of thermal power plants are committed to meeting the following electricity load demands over a day:

In addition to meeting the estimated load demands there must be sufficient generators working at any time to make it possible to meet an increase in load of up to 15%. This increase would have to be accomplished by adjusting the output of generators already operating within their permitted limits.

This problem is similar to that described by Garver (1963) [1], which involves scheduling electric generators to meet varying loads at different times of day.

The model estimates the lower cost of generating electricity within a given plan. Depending on the demand for electricity, we turn on or off units that generate power and which have operational properties and costs.

We will build a simple OPL/CPLEX model for the above UC problem to schedule power generators to meet demand.

The following is the simple formulation.

The decision variables of are

Demand must be met in each period.

d^p is the Demand given in period p. P^p_i is the total output rate production from generators of type i in period p.

Production output must lie within the limits of the generators working.

W^p_i is the number of generating units of type i working in period p.

The extra guranteed load requirement, g must be able to be met without starting up any more generators.

S^p_i is the number of generators of type i started up in period p.

All the integer variables have simple upper bounds corresponding to the total number of generators of each type, q_i.

Our objective is to decide which units should be working in which periods of the day to minimize total cost. The total cost is the total of startup cost, C, minimum cost per hour, c_i and level cost per hour, l_i for a period from begin, b^p to end, e^p.

The reader may be surprised that the individual production of each unit is not computed. One could introduce variables w^p_{ik} \in \lbrace 0, 1 \rbrace for generator number k of type i and p^p_{ik} \in \mathbb{R}^+ the production for that generator

Then we would have

But the w and p variables not appearing anywhere else (not in the objective function nor other constraints), they can be replaced by their summation. This is usually called a variable aggregation.

This UC model helps the electricity company to optimize the overall goals as possible.