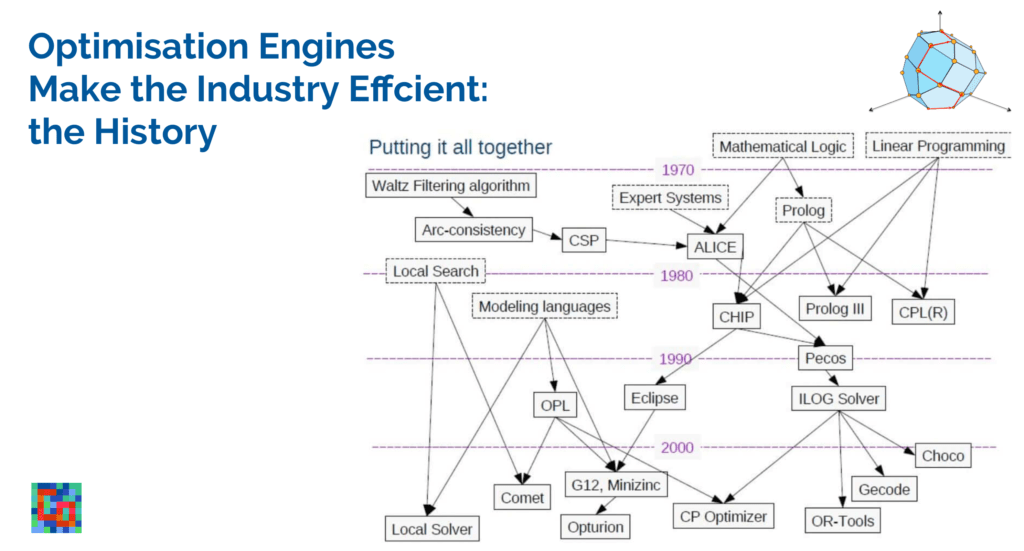 Heuristics were the safe bet

Heuristics are the main tool used to solve optimisation problems in the industry. Initially, heuristic localsearch algorithms were often used.

[…] Gershkoff (1989) presents an SPP that minimises the cost for the daily pairing problem. Gershkoff introduces a heuristic algorithm in which possible pairings are constructed at each iteration for a subset of the scheduled air legs. The heuristic continues until no further improvement is possible or a stopping criterion such as a time restriction is satisfied. Results are presented for American Airlines. Anbil et al. (1991) use this approach in software for American Airlines called the Trip Reevaluation and Improvement Program (TRIP). They explain the advances that allow the software to solve large problems more quickly. This software was sold to ten other airlines.

In 1998 CPLEX 6.5 is the first CPLEX version able to solve real problems.

“[…] the late 90s were preceded by a period of some thirty years of important theoretical and computational developments, many clearly relevant to MIP computation, but virtually none of which had been implemented in commercial codes. The conclusion was clear. It was time to change that. With CPLEX version 6.5 a systematic program was undertaken to include as many of these ideas as possible. You see the result in the chart. The net effect was that in 1998 there was a fundamental change in our ability to solve real-world MIPs.”

In 1997 the Parrot project started

The objective of the PARROT project is to provide efficient means to address the highly complex and costly problem of airline crew scheduling […] developing on promising results in the combination of Operations Research (OR) techniques and Constraint Programming (CP).

Decomposition for crew rostering was already a common technique in the literature.

But decompositions require complex algorithms to assist the IP engine:

The purpose of the Parrot project was to replace the heuristic with an engine suited to solving non-linear problems, in this case a constraint programming engine.

CP was a backtracking heuristic

Constraint programming is the “successor” of custom branch-and-bound algorithms from the 80s, with emphasis in generality and constraints that are not linear in a “non-numeric” way.

The available options in 1997 to solve industrial optimisation problems were

In 1997, only very few people had the skillset required to solve complex industrial problems. Only large companies could afford having large research and development teams to develop in-house solutions for their problems.

MIP engines are much faster

The problem requires to

This problem should remind you of the cutting-stock problem. The approach chosen by the original team was

Replaced the solution with

What matters in an industrial project

GAMS, AMPL, OPL, Mosel… pick the one you like the most

MIP engines despite their improvements cannot solve all type of problems.

Problems that typically resist them are scheduling problems with “continuous time” that is a very long time horizon, as they require one binary variable per time point.

Constraint programming engines are not new …

Constraint programming engines are not new … but CPO is a completely different as it introduces new mathematical concepts to model problems:

The problem was to organise a boat company that operates a combination of “taxi” and “bus” services for bulk material transportation. This is similar to organising a hub-and-spoke network.

The approach chosen by the original team was:

Replaced it with a straight CPO model:

In 2020 we are in a paradoxical situation: we have a large range of tools we didn’t have before but we don’t seem to be using them to their full extent.