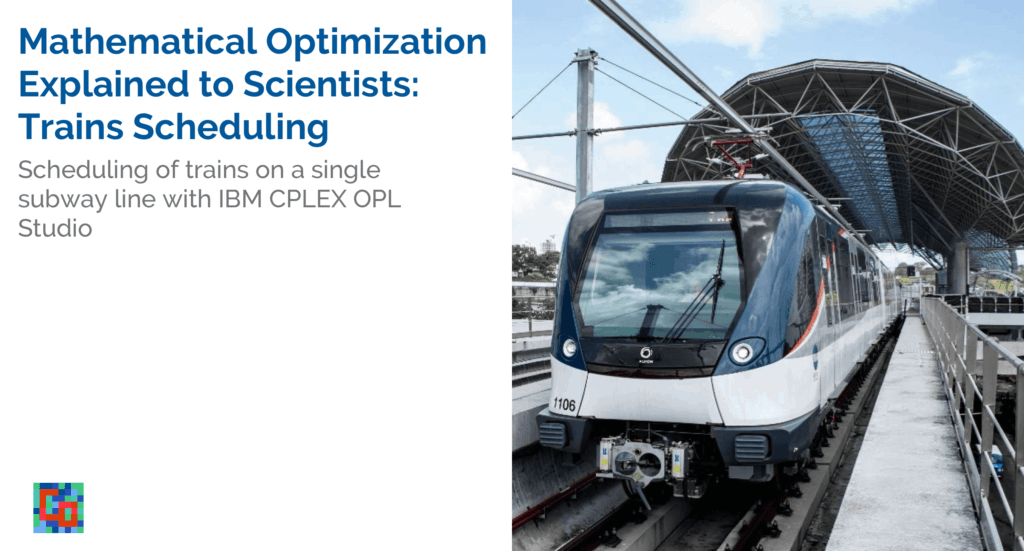 We were invited to give a talk about mathematical modeling of optimization problems to 4th year physics students. This material is based on that talk, and therefore intended to beginners with little knowledge about optimization, but a background in science.

A typical high-school physics exercise is the inclined plane 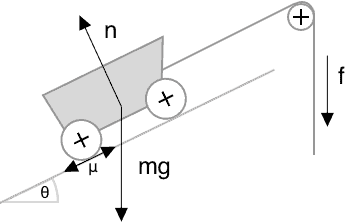 A typical classical mechanics exercise in university is the double pendulum. 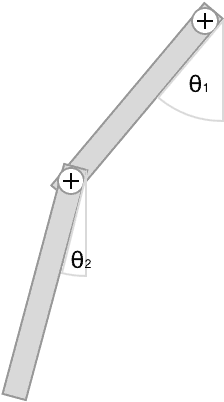 The double pendulum is the first example where the kinematic equations cannot be written just by analyzing the figure.

in this case we have

The write the equilibrium condition (minimum of action)

And after some algebraic manipulations you get

But unlike simpler examples, these equations cannot be manually solved (they don’t admit an analytic integral). The only way to proceed is to input them into a software that will solve them numerically.

By the way, the double pendulum is also interesting because it is a very simple example of deterministic chaos (small changes in the initial position lead to important changes in the movement)

The modeling process in physics

For complex objects the process is

In 1817, economist David Ricardo wanted to show that it was beneficial for countries to engage in trade even with other countries that had cheaper production costs.

To show his point he devised the following example : Portugal and England can both produce cheese and wine. But labor is cheaper in Portugal therefore they always produce more with the same amount of people.

Imagine there are only 3 people in each country

If instead each country specializes in the production they are the most efficient in, it gives

And we see the total production is higher than in the previous case. Therefore the countries can exchange and be better-off.

However the principle remains, economists use mathematical equations on a regular basis to quantify economic phenomena and investigate what is the optimal usage of resources

Linear programming was invented by the mathematician Leonid Kantorovich in 1939, for which he received the Nobel price in economy in 1975, shared with Tjalling Koopmans, for for their contributions to the theory of optimum allocation of resources.

George Dantzig published in 1947 the simplex algorithm that solves linear programs in a systematic way (Kantorovitch used to do it by hand). It was later extended to (mixed) integer programming, which is the tool that is used today.

The discipline that solves (industrial) resource allocation problems / optimization problems is not clearly defined. It is sometimes 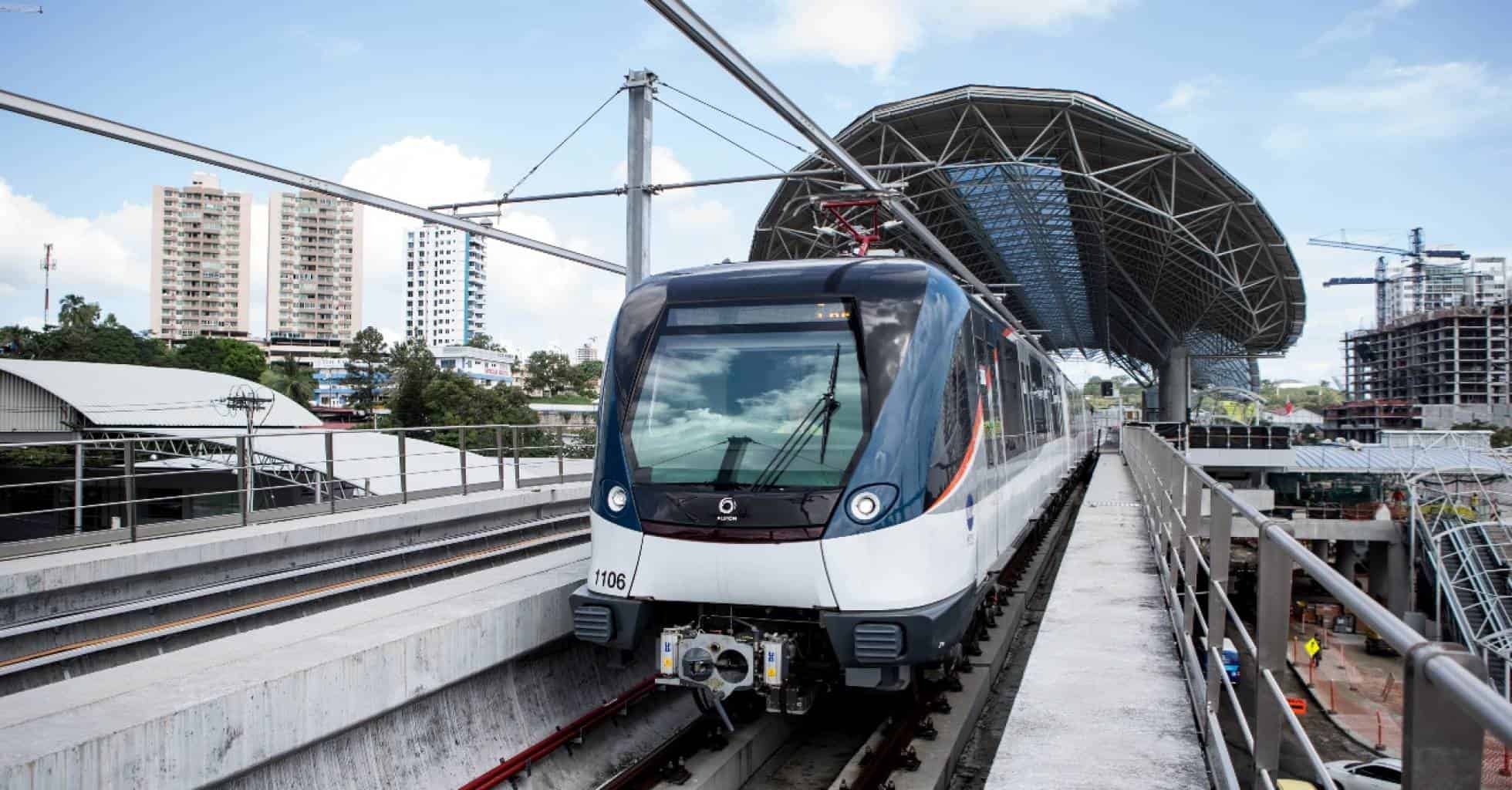 Let’s model a subway line to compute the minimum number of trains needed to transport all passengers.

Consider a subway line with only one direction, 3 stations, a capacity of 20 for each subway and the following amount of people wanting to move from one point to another. 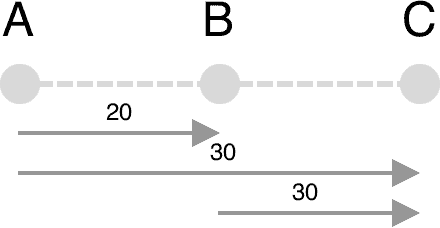 We will ignore the temporal dimension.

Written as a symbolic formula

This case was so simple that we were able to guess the formula from the problem.

Once we add a time dimension to the problem, there are new aspects that need to be considered.

Just guessing a formula is too complicated. The only viable approach is the same used for complex physics problems : describe the properties of the problem with equations and give the equations to a software to solve

We will need a similar equation for each train to account for the number of people entering and exiting a train. But the train moves. In order to simplify the problem we will consider it takes 1 time unit for a train to move from one station to the next. 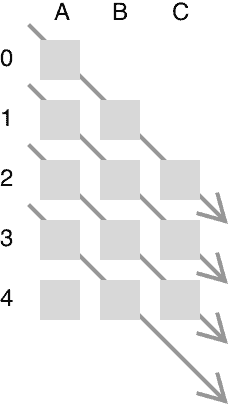 Then the accumulation of people in the train can be written

We finally need to add a variable to capture the fact that a train may or may not leave station A at time t.

And the fact that if there is no train at time t on station i, then nobody can enter or exit the (non existing) train.

Finally we add the capacity limit of each train

Putting it all together

The full set of equations becomes (we omit corner cases)

And when you put everything into a computer, it doesn’t work !

The problem is there is no constraint saying "people should get into the first train that has room". With this model, people are free to stay for ever on the platform if they wish. And that’s actually what minimizes the number of trains : people getting to the platform and never entering in any train.

First we need to express the fact that people get off where they are supposed to. We will express that saying the total number of people entering and exiting has to be equal to the values in the traffic matrix

Then we need quantify the time spent between the arrival to the platform i and the exit at station j. This would be obvious if we had individual data but here we have only aggregate numbers.

It may help to look at an example. The first line is the people in the platform, the second line those entering the trains

Let’s count 1 unit of delay per person per time period. Then the total delay in the figure is 30 = 1 5 + 1 5 + 2 5 + 2 5. We now need to perform the same computation without using the individual information (which passenger enter in which train).

We can achieve that by computing the cumulative of each array

And then taking the difference

And the sum gives 30

Playing with a couple of other examples one ends convincing oneself that this is not just a coincidence.

Now that we have a delay formula we can change the objective of the linear program for a lexicographic objective (delay, quantity). The optimization software will first try to minimize the total delay, and then minimize the number of trains used.

The most practical language (in our opinion) to write optimization models is OPL as it stays quite close to the mathematical notation.